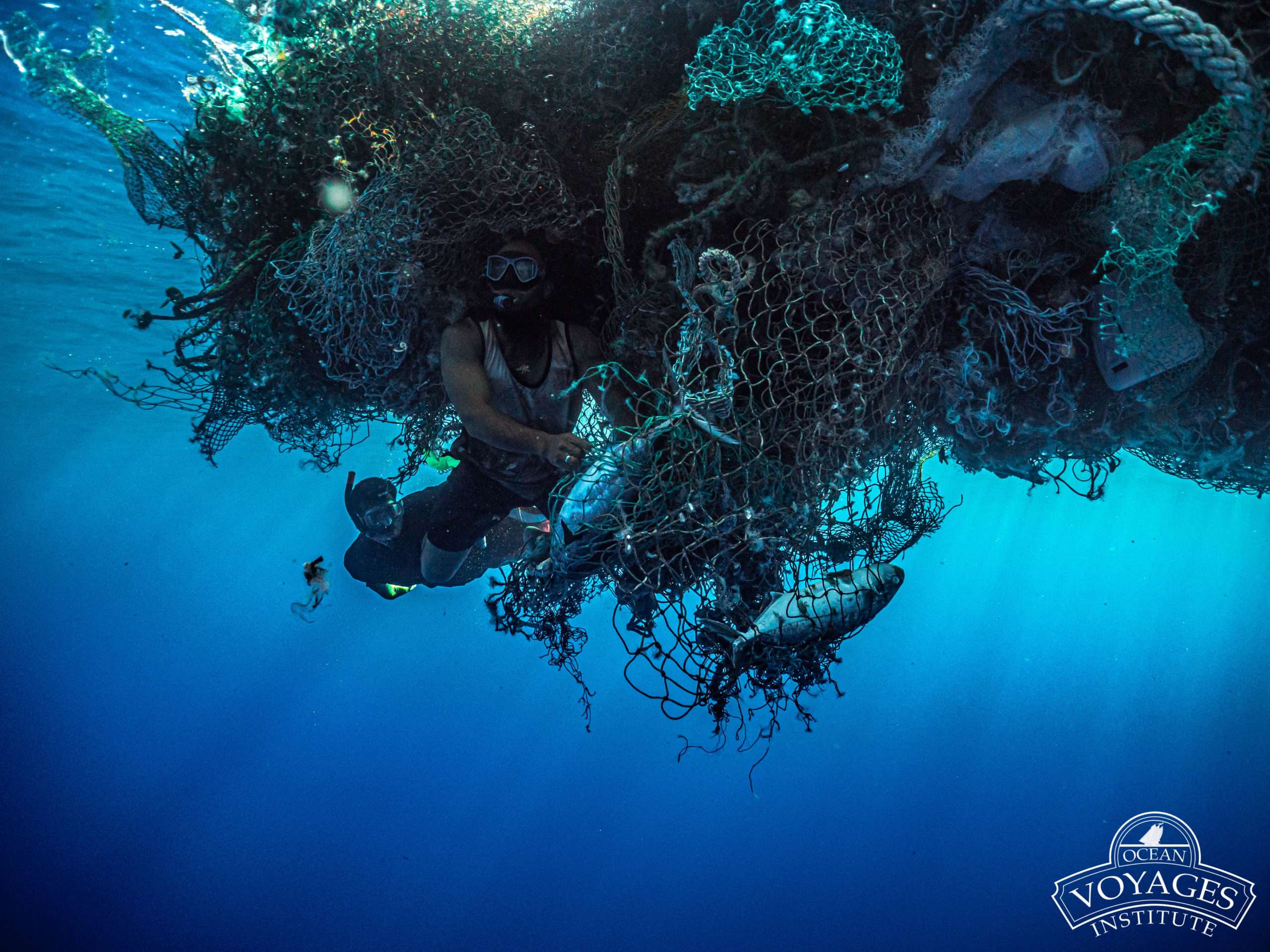 Imagine the size of France – the largest country in Western Europe – and triple it. No, this is not the size of the Sahara or the Caribbean, but the estimated size of the Great Pacific Garbage Patch. This is a huge trash swirl full of plastic in the North Pacific, which consists largely of ghost nets. In this article we will tell you more about it and tell you how you can protect the oceans from plastic yourself.

What exactly is the Great Pacific Garbage Patch?

The Great Pacific Garbage Patch is located in the North Pacific and consists of two zones where trash accumulates. The reason why rubbish accumulates in these very places is due to the ocean currents. The North Pacific Gyre rotates clockwise over the whole North Pacific. It is very difficult for the waste mass to escape from this vortex, because the Oyashio Current in the north and the Equatorial Current in the south keep spewing the waste back into the North Pacific Gyre. The Great Pacific Garbage Patch is the largest and most famous trash swirl in the world, but there are four more (South Pacific, North and South Atlantic and Indian Ocean).

How big is the Great Pacific Garbage Patch?

But how big is the problem of the Great Pacific Garbage Patch? It is estimated that the Gyre is three times as large as France or four and a half times as large as Germany. The study dates from 2018, so the Great Pacific Garbage Patch is even bigger today. At this size, it is hard to even imagine. But it is clear that the problem is extremely serious.

The mass and amount of plastic waste in the Great Pacific Garbage Patch is enormous. There are about 80,000 tons of plastic waste in the North Pacific, which is as much as 8 Eiffel Towers. A total of 1.8 trillion pieces of plastic float in the Great Pacific Garbage Patch, an average of 230 pieces for every single person on earth. Many of these pieces are tiny and are considered microplastics. The marine fauna often confuses the plastic pieces with food and ingests them. The result is that fish, birds and other animals cannot digest the plastic and die.

The problem of ghost nets

At Bracenet, of course, we always look at the problem of ghost nets and this is very relevant to the Great Pacific Garbage Patch: 46% of its total mass is made up of ghost nets. It is particularly important to recover these ghost nets. Because, as in other seas and oceans, marine animals get caught in the nets, cannot get free and die afterwards. Ghost nets are also an important source of microplastics. Rubbish that ends up in the Great Pacific Garbage Patch drifts for a long time in the Pacific – beverage crates from the 1970s have already been recovered! The ghost nets degrade into microplastics over the coming centuries through UV radiation, waves or temperature changes. Ghost nets therefore pose a double danger – in the short term and in the long term.

The Ocean Voyages Institute and its founder Mary Crowley are tough fighters against the Great Pacific Garbage Patch. In the first half of 2020, the Ocean Voyages Institute set a new record.  During this time they fished 170 tons of waste from the Great Pacific Garbage Patch, most of it consisting of ghost nets. It was the biggest clean-up ever carried out in the Pacific Ocean in the open sea. The previous record was more than doubled, thanks to innovative methods. GPS transmitters were used to recover the waste. The team on the S/V KWAI attached GPS transmitters to ghost nets in the belief that the ghost nets would lead them to further waste that was brought together by the ocean current.The assumption has been proven to be true, allowing larger quantities to be recovered more effectively.

A partnership against the plastic flood

Wear it with pride, spread the message for marine protection and join us against the plastic flood. Each of these Bracenets means that the Great Pacific Garbage Patch will be a bit smaller in the future.

What you can do to tackle marine pollution