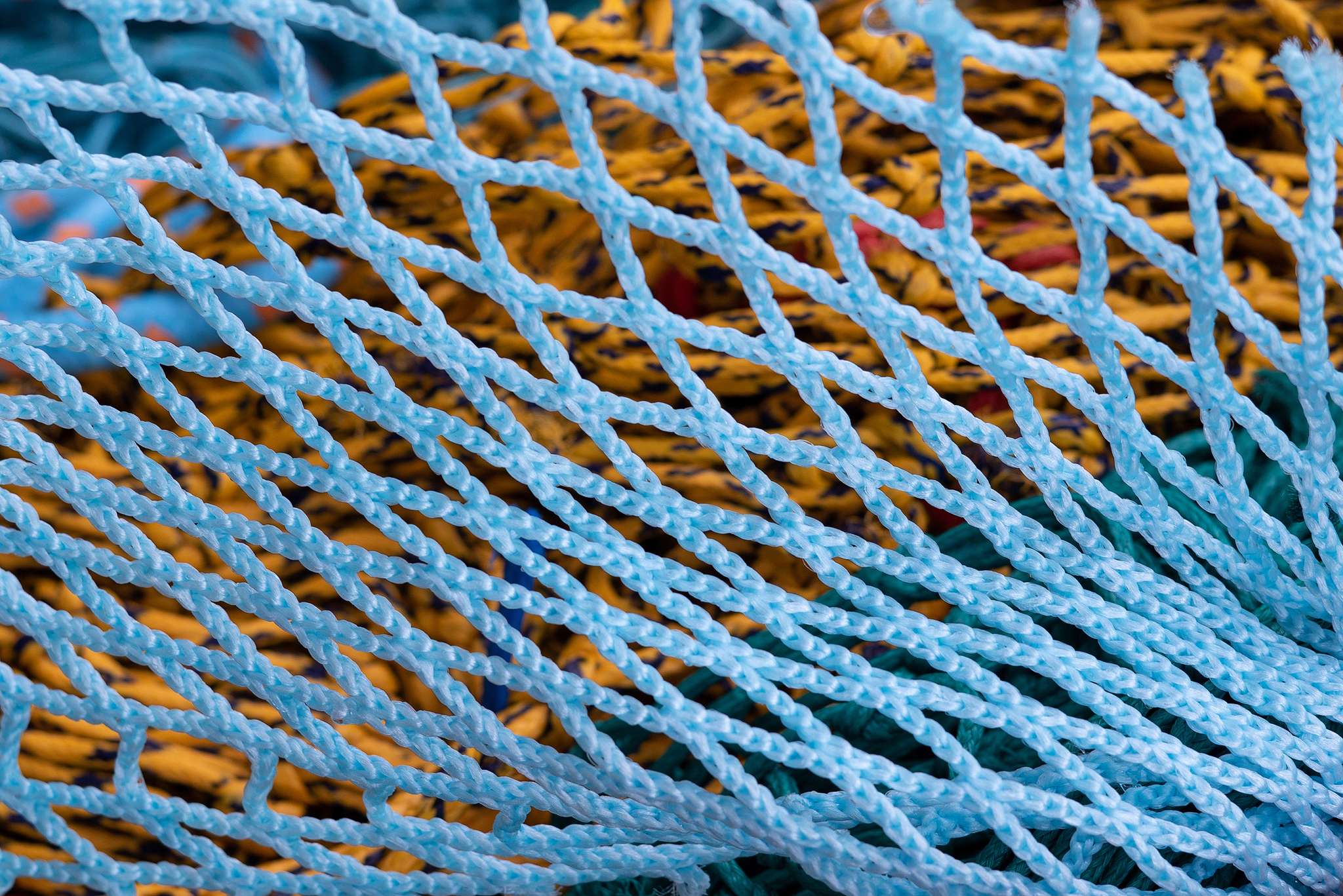 Why do all Bracenets look so different?

When you browse through our shop, you will quickly notice that our products all look different: They come in varying colours, are thicker or thinner and sometimes have one, two, or even three knots. We are often asked whether we can offer additional colours, too. The answer – it depends!

All our Bracenets, dog leashes, surf leashes and keyrings are made of used and discarded fishing nets that would otherwise drift through the oceans as garbage. We clean the nets and then upcycle them by hand – so the colour, thickness, mesh spacing and knots of our products are determined by the original properties of the nets.

But why is it that the nets are all so different? In this article, we will trace the causes and give you a short introduction to the underwater world of fishing nets.

When choosing a fishing net, colour can be one of the deciding factors next to strength, durability and cost. For example, colours such as green, blue or grey nets blend into the water so that fish unsuspectingly swim into the nets.

However, not always do fisheries have an influence on the colour of their nets, as it can also depend on the type of net, material and production company. Gill nets, for instance, are made of monofilament nylon (nylon strands of a single fibre) and often transparent. Nets made of polyamide and polyester are usually white, as this is the basic colour of the material. For trawl nets (usually made of HDPE, high-density polyethylene), manufacturers often use their own colours.

Therefore, two main reasons explain why our range of Bracenets covers so many colours. Firstly, we tend to choose HDPE ghost nets for our products, as these are best suited for daily use around the wrist, and their colours are often predetermined by their production factories. Secondly, many of our Bracenets come in shades of green, blue and grey – colours that are hard to discern at sea.

In addition to colour, our nets also differ in thickness, material and mesh spacing. These aspects depend on what the nets are intended for – what fish species should be caught using which means? Fishing methods range from fishing by hand to gigantic trawlers that pull their nets over the seabed. We will describe them shortly below, so you can get a better idea of why the nets used are all so different.

Fishing with a rod, line and hook is the simplest as well as the most selective form of fishing, therefore, the most gentle on marine life and ecosystems. Fishing lines are mostly made of plastic and can sometimes break, but they are quite small compared to nets and have a smaller impact on the sea.

Gill nets are used in multiple of the fishing methods described here. Their name derives from their function – fish first get entangled head first and when trying to retreat, get caught with their gills.

Bottom-set gillnets are anchored along the seabed by weights and lifted by buoys, creating net walls that can be up to 15 km long and 15 m high. They are controversial for use in coastal fishing due to the likelihood of by-catch (unintentional catch) of marine mammals such as porpoises and seabirds.

Seine nets are typically towed by boats along beaches, in inland waters or fish farms. In lake fishing, two boats move apart in a circle as they release the net from the drum and then slowly pull it back in again. The fish gather in a catch bag interwoven in the net, from which they cannot escape.

Fish traps such as baskets and pots are considered as “passive” fishing gear. They come in different shapes and materials, depending on the desired prey – for instance, lobsters, crabs, shrimps or fish that live at the bottom of the sea. The traps are anchored to the seabed and sometimes equipped with buoys to mark their locations.

Trammel nets consist of three layers of gill nets which are pulled to the bottom with weights and set up in the water with floating corks. Their special feature is that their different layers have different mesh sizes. If fish make it through the first layer, they are then caught by the narrower net in the middle.

Purse seine nets are drawn around a school of fish in a circle and subsequently closed by a line attached to the bottom part of the net to fully enclose the school. This method is typically used when fishing edible fish such as sardines, herring, mackerel and especially tuna. As these schools of fish are often accompanied by dolphins, there have been high rates of by-catch in the past as well as instances of local overfishing due to illegal search planes. Today, many places have adopted regulations to protect dolphins.

Drift nets are up to 60 km long and float vertically through the oceans like impenetrable walls. Since many whales, sharks, turtles and dolphins, as well as highly endangered fish species, are often caught in these nets, marine conservation organisations have been fighting against the use of drift nets for many years. These death traps often drift through the oceans for several days at a time and are located by attached transmitters. However, many nets are also lost and continue their way through the sea as the most dangerous of ghost nets. Drift nets have been banned in all EU waters since 2008.

Anchored floating gillnets are a further development of gillnets and have been permitted in the Mediterranean since 2006. They are anchored to the seabed and are stretched out to be “floating” in the water. Animal activists attribute them similarly devastating side effects as drift nets.

Pelagic longlines are used for deep-sea fishing. Up to 20,000 bait hooks are hanging from an up to 130 km long line. Because of its enormous by-catch rate, longline fishing is heavily critiqued. The baits that are drifting close to the surface can not only kill sharks and sea turtles but also lure many seabirds to their death.

Trawl nets are divided into pelagic and demersal trawl nets, which are both towed by trawlers. The pelagic trawl is used at depths of 50 – 300 m and is shaped like a funnel with a bag at its end. Demersal trawls have a similar but shorter structure and are used at depths of up to 1,500 m. Both variants are criticised for their high by-catch rate, and demersal trawls are also criticised for dragging over the seabed and thus destroying entire ecosystems.

Beam trawls are demersal trawls with the net kept open by means of a wide bar. The net glides across the seabed like a sledge on skids, pulled by a trawler. Iron chains, attached to the skids, stir up the seabed to drive all fish into the net. This type of fishing causes immense destruction of the seabed with all its marine flora and a high by-catch rate.

On the Galapagos Islands fishers use another, albeit illegal, fishing method. Nets are attached to floating bodies, disguised as patches of garbage, and drift around the islands with the current. This way, it is possible to fish unseen in places where it is not allowed, and the nets are subsequently collected in places where it is allowed again. However, the nets often get stuck underwater or drift ashore, so that the nets continue to fish as ghost nets and pollute the environment.

Does it leave you with a strange feeling to read about all these fishing methods? Don’t worry, same here. We’ve tried to keep it as neutral as possible: To explain why the nets all look different and also because we understand that this is how fisheries must earn a living. What we do not understand, however, is the overfishing of our seas, the use of illegal fishing methods, the apparent “normality” of bycatch and the discarding of nets so that they continue to haunt the seas as ghost nets.

In supermarkets, certain labels promise sustainable and responsible fishing. But are these certificates truly credible? We are very critical of them – but it would break the scope of this article to examine them in detail. We will do that elsewhere. In the meantime, here are a few links to help you start your own research:

How do fishers decide on a method?

In addition to environmental conditions such as weather and currents, there are other factors that fisheries have to face in order to successfully catch prey. There are differences between small-scale fisheries and industrial fishing.

Bracenets are just the beginning

As you learned in our blog post 5 Facts you should know about ghost nets, nets remain a great danger to seas and marine life if they are lost or intentionally discarded at sea – until they have decomposed in 600-800 years and continue to pollute the seas as microplastics. With Bracenet, we are doing our part to retrieve the ghost nets from the oceans and process them into new products.

We are constantly working on new products to process nets of different thicknesses, mesh spacing and material. Do you have a burst of inspiration? Let us know your ideas!