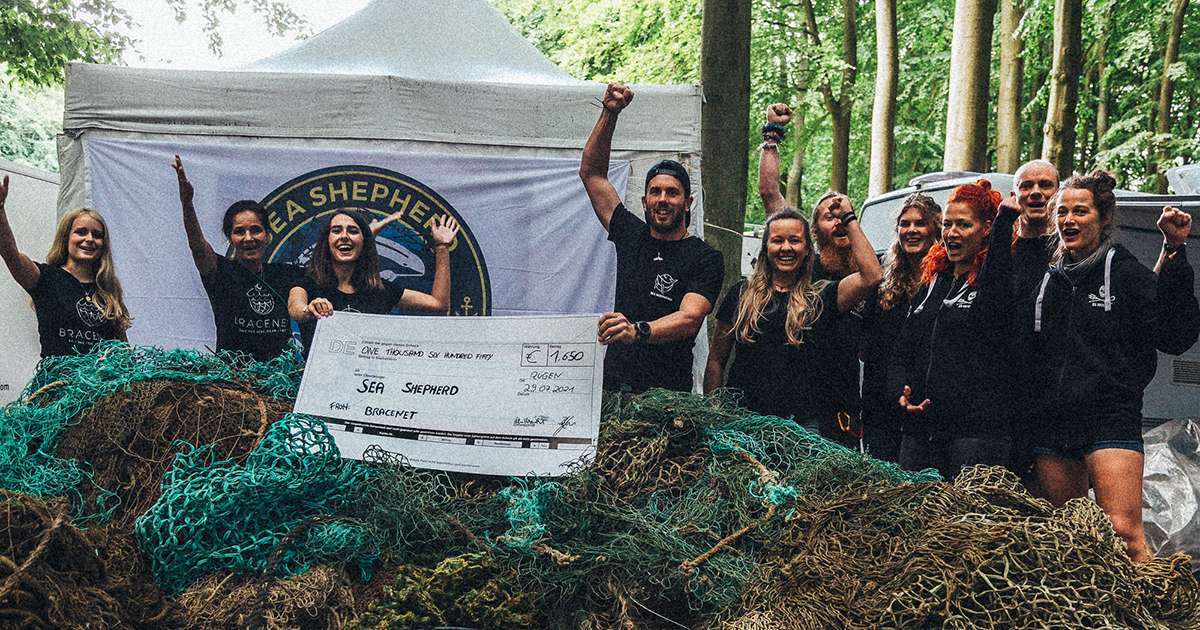 Life has emerged from the sea – and the oceans are still vital for our survival to this day. But they are in danger: marine pollution, underwater noise, illegal fishing, and the consequences of the climate crisis threaten ecosystems and consequently our livelihoods. There is only one solution: We have to do something! We believe that we can accomplish the biggest difference when we collaborate with other organizations and companies that share our mission. Our joint impact with our partners Healthy Seas, Ghost Diving and Nofir is testament to this point. With this in mind, we are proud to fight alongside Sea Shepherd for the future of our oceans.

Who is Sea Shepherd?

Sea Shepherd is an international, non-profit organization that is mostly out at sea, protecting biodiversity and marine ecosystems. But why does the crew of the so-called “Neptune’s Navy“ decide to spend long months on stormy seas? Well, in their words, protecting the oceans means protecting our own lives. And that’s exactly what Sea Shepherd is doing, with strong actions instead of empty words.

While international conservation laws often exist only on paper, Sea Shepherd takes action to enforce them. The organization investigates illegal activities on land and at sea, documents them and, if possible, stops them directly. Sea Shepherd was founded back in 1977 and is now fighting for justice at sea with more than 11 ships worldwide.

Since when is Bracenet allied with Sea Shepherd?

Our story together begins in 2018, when Bracenet had just been founded. We were always passionate about Sea Shepherd’s mission and decided to assist their work. And so, we raised 5,000 € for Sea Shepherd within 24 hours! After this successful campaign, we firmly resolved to repeat the collaboration as soon as we would recover a black ghost net. In 2021, the time finally came and we raised another 1,650 € for Sea Shepherd. And today, we’re continuing our story with the upcycling products of our BALTIC SEA CAMPAGIN series. But let’s go through everything step by step.

Have you ever seen porpoises? That’s not so difficult, at least it shouldn’t be, since they are native to the North and Baltic Seas after all. But we can no longer see as many animals as we used to from the coast. The harbor porpoise population in the western Baltic, for example, has dwindled to 500 animals and is threatened with extinction. Among their greatest threats are gillnets. These huge nets stretch through the dark water like invisible fences, causing many harbor porpoises to become entangled and die as bycatch. This happens even in marine protected areas, which are supposed to protect ecosystems. But it is not too late, there is still a chance: If we stop gillnet fishing now, the porpoise population can still recover. So let’s get active!

Get active? That’s the cue for Sea Shepherd. The organization set sail from Germany for the first time in 2017 to patrol the Baltic Sea for its PERKUNAS CAMPAIGN and protect its inhabitants. At the heart of the campaign: harbor porpoises. From July to September 2017 and from April to June 2018, the “Emanuel Bronner” and the speedboat “Sierra” explored different areas in the Baltic Sea. In the process, the teams documented illegal nets and reported them to the relevant authorities. During their trips, they also assessed how threatened harbor porpoises are and recovered deadly ghost nets.

In 2018, we promised Sea Shepherd: If we recover another black ghost net, we’ll turn it into a Bracenet edition just for your community. Almost three years later, the time had finally come! To support the organization with their current BALTIC SEA CAMPAIGN, we decided to donate 2 € for each of the sold Bracenets. This edition was also sold out in record time thanks to the incredible support of our two communities. With a new donation of 1,650 €, we then visited Sea Shepherd’s BALTIC SEA Campaign Camp on the island of Rügen in July 2021 to present them with this donation.

But what is the BALTIC SEA CAMPAIGN all about? Sea Shepherd is back in the Baltic Sea and has made it its mission to recover as many ghost nets as possible from the Baltic Sea. Approximately 10,000 nets are lost here every year – so there is a lot to do. Using new technology such as underwater robots and special sensors, the ghost nets are tracked down and then recovered.

When we visited Sea Shepherd on Rügen, we took two tons of their recovered ghost nets back to our netquarter in Hamburg. We want to give these nets a new life and are gradually preparing them for upcycling. We sort them, clean them and finally handcraft them into new products. Since there are many small pieces of nets, we can only produce the products of the BALTIC SEA CAMPAIGN series in small quantities at a time. Check our online store regularly to catch one!

To date, Bracenet has donated a total of 6,650 € to Sea Shepherd – thanks to you! Without our community, Bracenet would not be possible. Without you, we would not be able to finance recovery trips or support other projects. That’s why we want to offer you more and more and work hard on further upcycling ideas in our manufactory in Hamburg. You can also look forward to some more products from the BALTIC SEA CAMPAIGN series! And when we have used up the whole net? Well, then there will be the next donation to Sea Shepherd. We are very excited to continue fighting with Sea Shepherd against ghost nets and for our oceans.

Homosexual marine animals? Exactly! Aristotle reported about homosexual couples in the animal kingdom as early as 2300 years ago, and until today, homosexual behavior has been observed in about 1500 animal species. To celebrate Pride Month in June, we further researched the topic of homosexuality in marine animals.