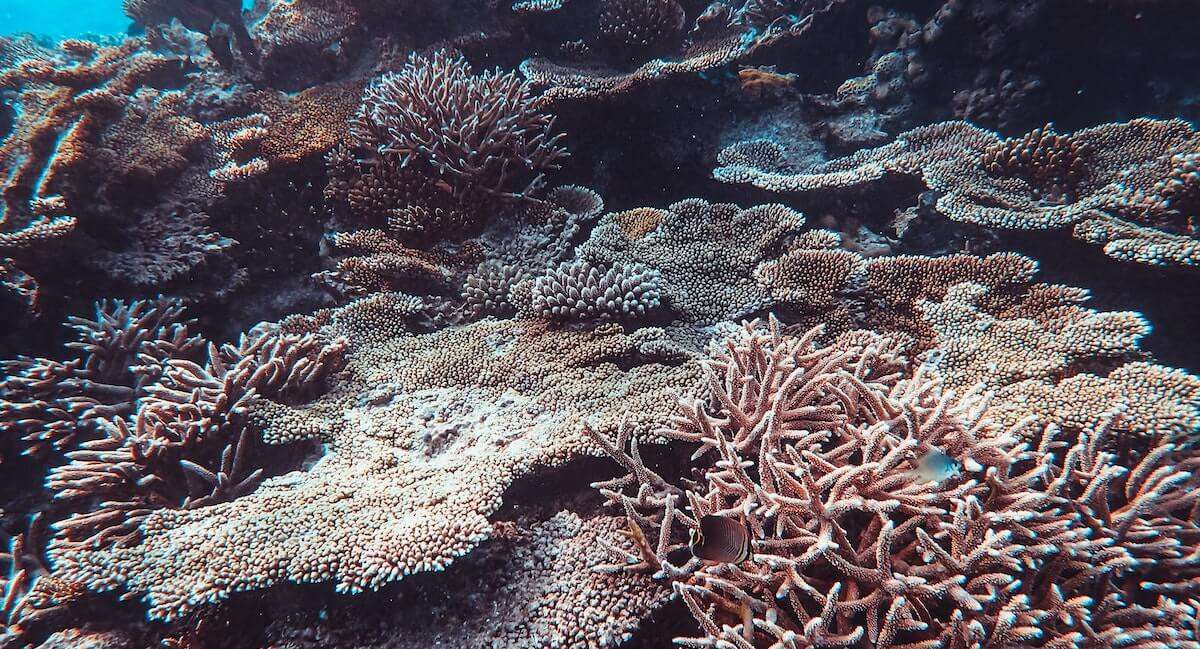 The oceans cover ⅔ of our planet – they are so vast that they seem invulnerable. But through our work we know that they struggle with many problems, such as pollution, overfishing, warming or eutrophication. And there’s another issue: ocean acidification. What this is and what it means for the oceans, we explain to you in this article!

Cause of ocean acidification

The ocean has absorbed about ⅓ of anthropogenic carbon dioxide over the last six decades. Emissions have increased by 40% compared to pre-industrial times, which is why the daily emission uptake of our oceans is now equivalent to about 24 million tons of CO2! “Isn’t that great!” we might say now. After all, without the oceans, climate change would progress even faster. But as pleasing as this service may be for the climate, it is worrying for the oceans.

Since CO2 is soluble in water (H2O), a chemical reaction occurs when it is absorbed. The CO2 from the atmosphere reacts with the H2O to carbonic acid, which splits into hydrogen carbonate (HCO3–) and (attention, important:) hydrogen ions (H+). You can follow the exact process in figure 1.

In this case, we only have to remember that the uptake of CO2 leads to an increase in hydrogen ions. But what does this have to do with acidification?

To find out whether an aqueous solution is acidic or basic, the pH value is measured. pH means “Power of Hydrogen” and depends, as the name suggests, on hydrogen ions in the solution. Since CO2 triggers a chemical process that releases many hydrogen ions, the pH value in the water changes – the oceans acidify.

Compared to pre-industrial times, the pH level of seawater at the surface has dropped by 0.1 units – from 8.2 to 8.1. This may not sound dramatic at first, but it is already associated with an increase in acidity of around 30%.  As can be seen in Figure 2, scientists expect a further increase of 0.3 to 0.4 units by the end of this century. The expected increase in acidity by the year 2100 is thus 170%.

Figure 3 shows the variations of the pH values in the oceans over the last 25 million years. So, it is not unusual for pH values to fluctuate. The problem is rather that these fluctuations usually stretch over a period of millions of years and are now progressing at a much more rapid rate due to the enormously high emission of carbon dioxide.

Ocean acidification has far-reaching implications for marine environments and their inhabitants. Some are already in full swing. As you know by now, the amount of free hydrogen ions (H+) in the ocean is increasing due to the uptake of CO2 – which is why the pH level is rising. If you look at the first figure again, you will see that the free hydrogen ions (H+) can form bicarbonate (HCO3–) when they react with carbonate.

Figure 4 shows the shell of a pteropod (also called sea butterfly) that was exposed to seawater adjusted to projected temperature and saturation levels for the year 2100. It took only 45 days for it to almost completely dissolve.

Mussels, crustaceans and corals are not only affected by carbonate deficiency in their adult state. Especially in the larval stage, their development is disturbed, their growth is restricted and population sizes become smaller. Overall, there is a lower survival rate. As a result, fish also have less prey available. While adults are generally very tolerant of decreasing pH levels, larval clownfish are particularly sensitive. In young clownfish, for example, acidification affects their sense of smell, making it harder for them to detect enemies early. In addition, the animals lose their natural habitat due to the decrease in coral reefs. Since corals are incredibly important to maintain biodiversity, but will hardly exist by the end of the century due to acidification, it is very likely that there will be major changes. Their loss will not only greatly alter the habitat of many more marine species, but will also be felt by the coastal protection, tourism sector and fisheries. What the exact developments will look like is currently unclear. However, since there are organisms such as algae and seagrasses that benefit from the excess CO2 due to their photosynthesis, they could dominate the underwater world in the future. How this or the change in the marine food chain will in turn affect the lives of individual fish species or marine mammals has not yet been researched.

Ultimately, the change in pH levels also has an influence on the acoustic properties of the oceans. Whales, for instance, which can communicate over several kilometers through their songs, are already influenced by this (more on this in our blog post on underwater noise). The exact relationships are very complex and not yet fully researched.

Effects of ocean acidification on humanity

Ocean acidification will not only be felt in the oceans themselves. Since the ocean provides multiple functions for humans, humanity will also feel consequences.

Since research to date has focused more on the effects of ocean acidification and less on possible solutions, there is a very limited literature selection on this topic. Overall, three solution strategies are known, some of which go hand in hand: Reduce, Repair, Protect.

Reducing refers to a limitation of the CO2 concentration. This can be achieved either by reducing CO2 emissions or by removing CO2 emissions from the atmosphere. Other measures against coral reef degradation, such as the use of alkaline agents or the “application of seagrass,” can serve to repair, but are limited to a local usage option. In addition, there are several approaches of protection strategies that are particularly designed to build resilience. This can be e.g. in the form of sustainable fisheries or waste reduction in coastal areas. You can read more about these approaches here.

All in all, ocean acidification is probably not without reason also referred to as the “evil twin” of climate change. The consequences of both are global and so far-reaching that they will have a major impact on our future lives. Since CO2 emissions are a major contributor to the advancement of the problem in both cases, an acute and drastic reduction in CO2 emissions could counteract both and at least mitigate worst-case fears. The good news is that there are theoretically enough ways to emit less. As a study recently published, for example, there is great potential to save CO2 directly in fishing. Fishing with bottom trawls releases a gigaton of carbon in a year, contributing no less to CO2 emissions than air travel. Fewer nets in the oceans and less CO2 in the air would make not only nature and the animals but also us very happy!

If you want to know more, feel free to dive into the topic yourself. Scanning our QR code guides you to our literature: