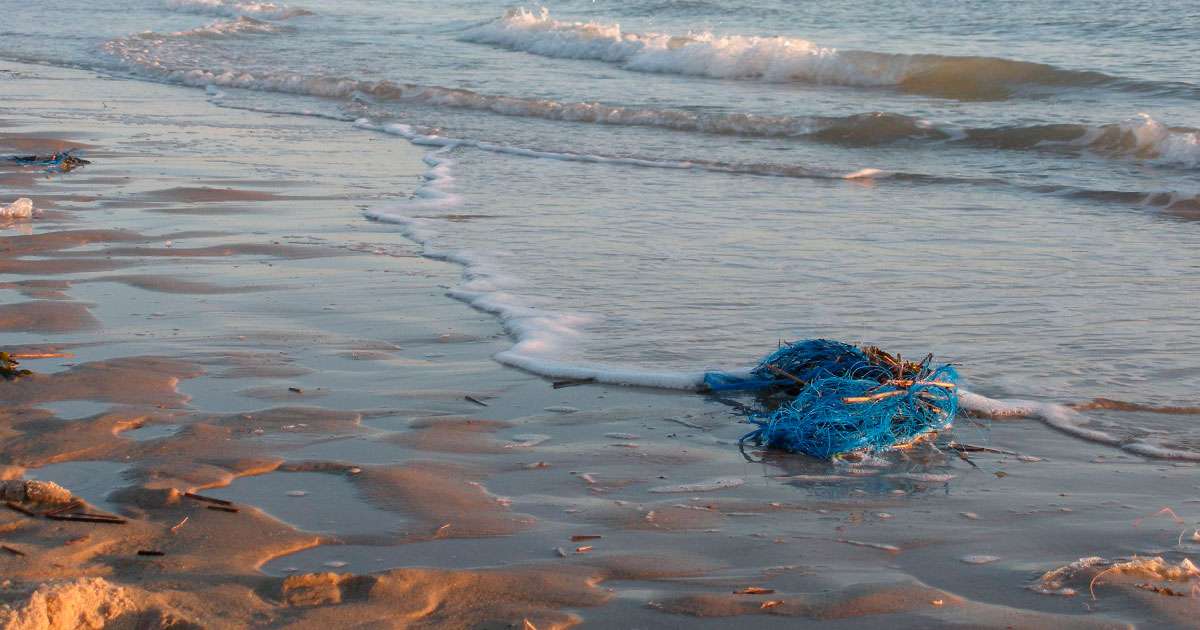 If you like to spend time along Germany’s North Sea coast, you will likely be well acquainted with weather, wind and waves. You’ll also be familiar with another sight: Small threads of plastic, mostly orange or blue, that have been washed ashore. These are so-called “dolly ropes” which are used to protect fishing nets that are dragged across the ocean floor. Many of these plastic threads get lost and drift through the oceans or onto the beach as plastic waste. But what exactly are dolly ropes? Why do so many of them break off and how do they impact the environment?

In this blog post, we’ll answer these questions and also look for potential solutions to this problem. You can probably imagine that we have some ideas in store, how we can upcycle dolly ropes into new products. Read until the end to learn more!

How do dolly ropes work?

Dolly ropes are used especially in bottom trawling. This involves dragging huge, funnel-shaped nets across the seabed, where they churn up entire ecosystems and catch everything that gets into their way. This extremely destructive type of fishing also takes its toll on the nets themselves. They chafe on the bottom or start to tear when they get caught on stony ground.

Fisheries have developed dolly ropes to protect their expensive nets. These are many small plastic threads made of polyethylene, usually about 1-2 meters long. They are put together in bundles and attached to the bottom of trawl nets in the middle of the bundles. When the nets are pulled across the seabed, the threads of the bundles splay out, forming a protective layer between the seabed and the fishing net.

How do the dolly ropes end up in the environment?

Dolly ropes are wear and tear items: they chafe, get entangled and in some cases, they also tear off. According to the Thünen Institute, a German federal research institute for fisheries, 10 to 25% of all dolly ropes are lost during their first two weeks of use. As a result, they require regular maintenance and replacement. This creates a perpetual cycle through which dolly ropes are lost every day and pollute the environment. And that’s not all. Due to poor waste management on many fishing boats, just as many dolly ropes end up in the sea again if they are not disposed of properly during maintenance work. That means, about 20 to 50% of all dolly ropes end up in the sea.

What does this all mean for the environment?

Dolly ropes are part of a particularly destructive fishing practice. Bottom trawling destroys the seabed irretrievably and has an enormously high bycatch rate. However, we want to exclude this larger criticism from this discussion, as we have already discussed some of it elsewhere, and now only focus on dolly ropes themselves.

When plastic enters the environment, danger to wildlife is not far behind. Many animals confuse plastic with natural materials and dolly ropes are no exception. For instance, we can observe this on Helgoland, where Germany’s only colony of Nothern Gannet dwells. These birds collect dolly ropes to build or reinforce their nests. Many get entangled in the nets and cannot free themselves on their own, so they suffer an agonizing and slow death.

Plastic waste and microplastics in our oceans

Have you ever heard of the Great Pacific Garbage Patch? This huge garbage vortex in the North Pacific covers about four and a half times the size of Germany and consists of vast amounts of plastic waste. 46% of this consists of former fishing gear such as ghost nets and dolly ropes. It takes 400 to 600 years for such net parts to decompose in the oceans, and even then, only to microplastics. These are tiny plastic particles that irrevocably pollute seawater and are ingested by many marine animals as supposed food. With dolly ropes, marine pollution is pre-programmed: Their abrasion on the seabed creates this harmful microplastic all the time.

What can we do about this problem?

Dolly ropes exist to protect valuable material. That’s a good goal, of course – but not at the expense of the environment. That’s why we need alternative solutions to end this form of environmental pollution. What might that look like?

These proposed solutions all look to the future and want to prevent more dolly ropes from ending up in the oceans. But what about those that are already there? The answer is quite simple: We have to collect them. Then we can return them to the material cycle and recycle them. We have lately been working on an idea on how to upcycle them. We present our earrings made from dolly ropes!

The oceans are in danger: marine pollution, underwater noise, illegal fishing, and the consequences of the climate crisis threaten ecosystems and consequently our livelihoods. We have to do something about it! We believe that we can accomplish the biggest difference when we collaborate with other organizations and companies that share our mission. With this in mind, we are proud to fight alongside Sea Shepherd for the future of our oceans.

Homosexual marine animals? Exactly! Aristotle reported about homosexual couples in the animal kingdom as early as 2300 years ago, and until today, homosexual behavior has been observed in about 1500 animal species. To celebrate Pride Month in June, we further researched the topic of homosexuality in marine animals.