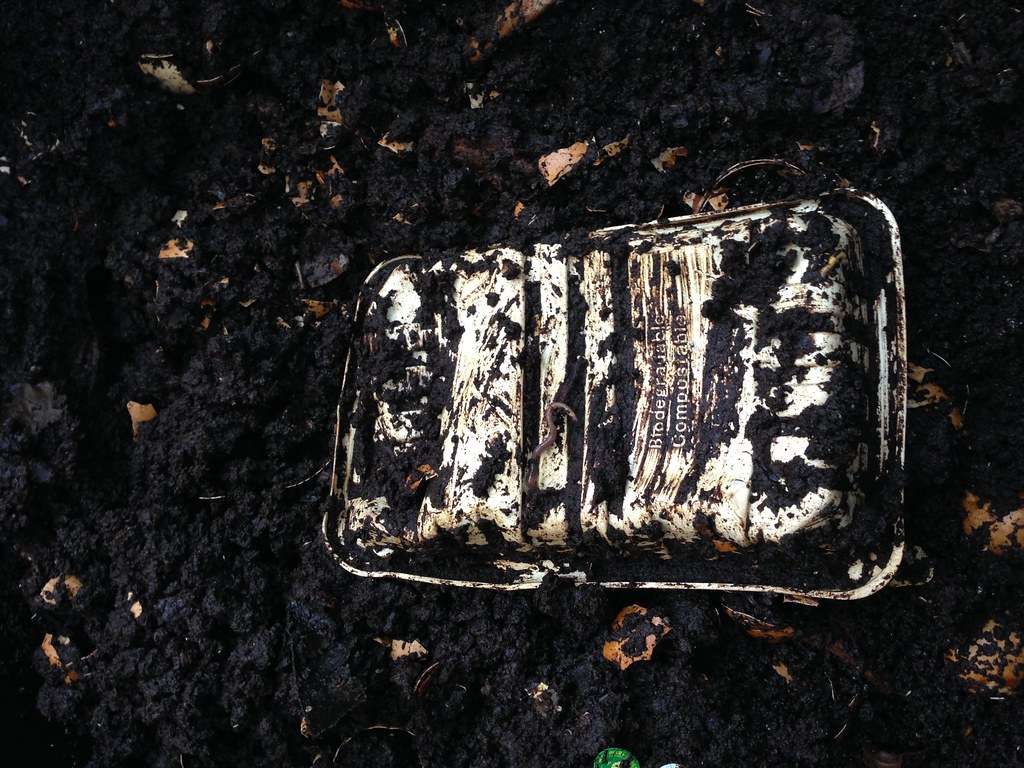 In the supermarket, at the salad bar, in online shops or even for food to go: “bioplastics” are always advertised as the environmentally friendly alternative to plastic. Perhaps you’ve been told: “It’s not plastic, it’s cornstarch!” But are bioplastics really a sustainable alternative to conventional plastic? Let’s take a closer look at the whole thing.

But first: What are bioplastics anyway?

When we are in the supermarket, we take it as a matter of fact that whatever claims to be “organic” is food from organic farming. However, this is not so obvious with bioplastics. “Bioplastics” is not a protected term and there is no uniform definition. According to the German Federal Environment Agency (Umweltbundestamt, UBA), bioplastics must either:

Sounds a bit confusing and anything but “bio” or organic, doesn’t it?

The term leads us astray

The disposal is complicated and unclear

This means we also cannot know how to properly dispose of it. The recycling route to the yellow bin is not the right one, as bioplastics interfere with the recycling of conventional plastics. On the one hand, they often fail to meet the technical requirements, and on the other hand, they do not possess the potential for recycling like conventional plastics, thus impairing the quality of secondary raw materials. Neither should bioplastics be disposed of as organic waste, as they do not decompose fast enough. In addition, since it looks like normal plastic at a quick glance, this might mean that the waste collection service won’t accept it as organic waste and likely not take it with them. The only advantage is that renewable resources only release as much CO2 during combustion as they have absorbed during their growth.

Cultivation for the raw materials takes away agricultural land

Biobased plastics are made from raw materials that are otherwise also used as food. The arable land on which, for example, corn and sugar cane for bioplastics is grown is then no longer available for food cultivation, wild animals or simply for the preservation of natural life. There can be competition for land when valuable land is used (or wasted?) for the cultivation of packaging material.

The cultivation of the raw materials pollutes the environment

The cultivation of the required raw materials has a negative impact on the environment. Large amounts of fertilizers or pesticides are used, polluting water and soil. The soils become over-acidified and nutrients enter rivers and lakes, accelerating the growth of algae. This eutrophication can also lead to the death of fish. According to UBA, this pollution is even higher than that caused by the production of conventional plastics.

Even though less CO2 is emitted in the production of bioplastics, fossil fuels such as crude oil and natural gases continue to be used, for example in the form of diesel or fertilizer. Therefore, the life cycle assessment still appears to be roughly the same in the end, as the ecological footprint simply shows up elsewhere. This is the conclusion of an UBA study.

When the market share of bioplastics increases, greenhouse gas emissions will also increase

If the proportion of bioplastics increases, more land will be needed for the cultivation of raw materials. If forests are cleared for this purpose, more greenhouse gases are released into the atmosphere because the forests can no longer bind CO2.

The composition of plastics is often intransparent

For bio-based plastics, the minimum proportion of renewable raw materials is not defined. Bioplastics often contain a large proportion of fossil raw materials in the form of stabilisers, lubricants and antistatics. Manufacturers do not have to disclose the proportion of these additives and thus, according to UBA, the biobased proportion can only be determined experimentally in polymers and in products.

Bioplastics are often not composted

Even if bioplastics end up in the composting facilities of a waste disposal plant, they are often sorted out. In industrial composting plants, bioplastics do not rot fast enough, they only get 3-6 weeks to decompose, but it would take 12 weeks, thus leaving impurities in the finished compost. In case of doubt, these must be screened out even after the composting process (which causes additional high costs). Furthermore: Even if bioplastics were to be completely decomposed, only CO2 and water would remain and no valuable compost components such as minerals, nutrients or humus.

Bioplastics remain in nature and the sea

Bioplastics do not simply rot in nature or in the domestic compost, so they have no recognizable advantages over petroleum-based plastics and do not change anything about our plastic problem. This is because nature does not provide the optimal conditions for decomposition. Most of the time there is not enough heat, temperatures of 60 degrees would be necessary, and there are no decomposing enzymes or fungi.

Bioplastics cannot simply decompose in the sea either. Our oceans are so diverse and so are the accompanying conditions. Researchers have discovered that certain bioplastics do degrade more quickly on the sea bed in the tropics than in the Mediterranean. However, in ice-cold water, the Arctic or the deep sea, bioplastics persist for years. At temperatures of 0 to 4 degrees, nutrients are lacking and bacteria have difficulty digesting the materials. A bioplastic that would be degradable in all these different conditions seems utopian and would not even make sense at all. Dumping packaging packaging in nature or the sea is clearly the wrong message, harming ecosystems and animals.

Bioplastics appear to be a complicated topic, but we believe it’s clear that they are not a sustainable alternative to conventional plastics. Of course, it is always better to use fewer fossil resources and save CO2, but when the environment is affected elsewhere via the acidification of soils and the eutrophication of waters, the advantages and disadvantages cancel each other out. If we as consumers do not know when bioplastics are involved and how we should dispose of them, there is no advantage for us here either. The biodegradable packaging suggested to us by use of bioplastics is definitely not compatible with industrial composting plants and domestic compost. We would therefore like to see an unambiguous designation as to whether and what kind of bioplastic is involved.

The approach of producing plastics from natural resources is not bad – and not new either (plastics were already developed from cellulose around 1870), but it is still quite expandable. With regard to recycling management, research is being carried out to produce bioplastics from biowaste, residual raw materials such as corn leaves or leftovers from wood processing. This would make a lot more sense, as no land would then have to be used for the cultivation of raw materials and the CO2 balance would also be lower. The research will certainly take a few more years, but even then it remains questionable whether the market share will change, the current disadvantages will be reduced and structures for clear disposal can be created.

Thus our conclusion is: Avoiding plastic products as much as possible is the most sustainable alternative, and one should not be misled by the term “bioplastics”. In our Netquarter, we also try to avoid plastic. Our Bracenets and dog leashes are wrapped in cotton bags, our team wear comes in cardboard boxes. We are in constant contact with our suppliers and ask them to avoid plastic packaging. And that we transport our lunch in reusable containers goes without saying.

Here we also have 31 tips for you on how to reduce your plastic consumption in everyday life.