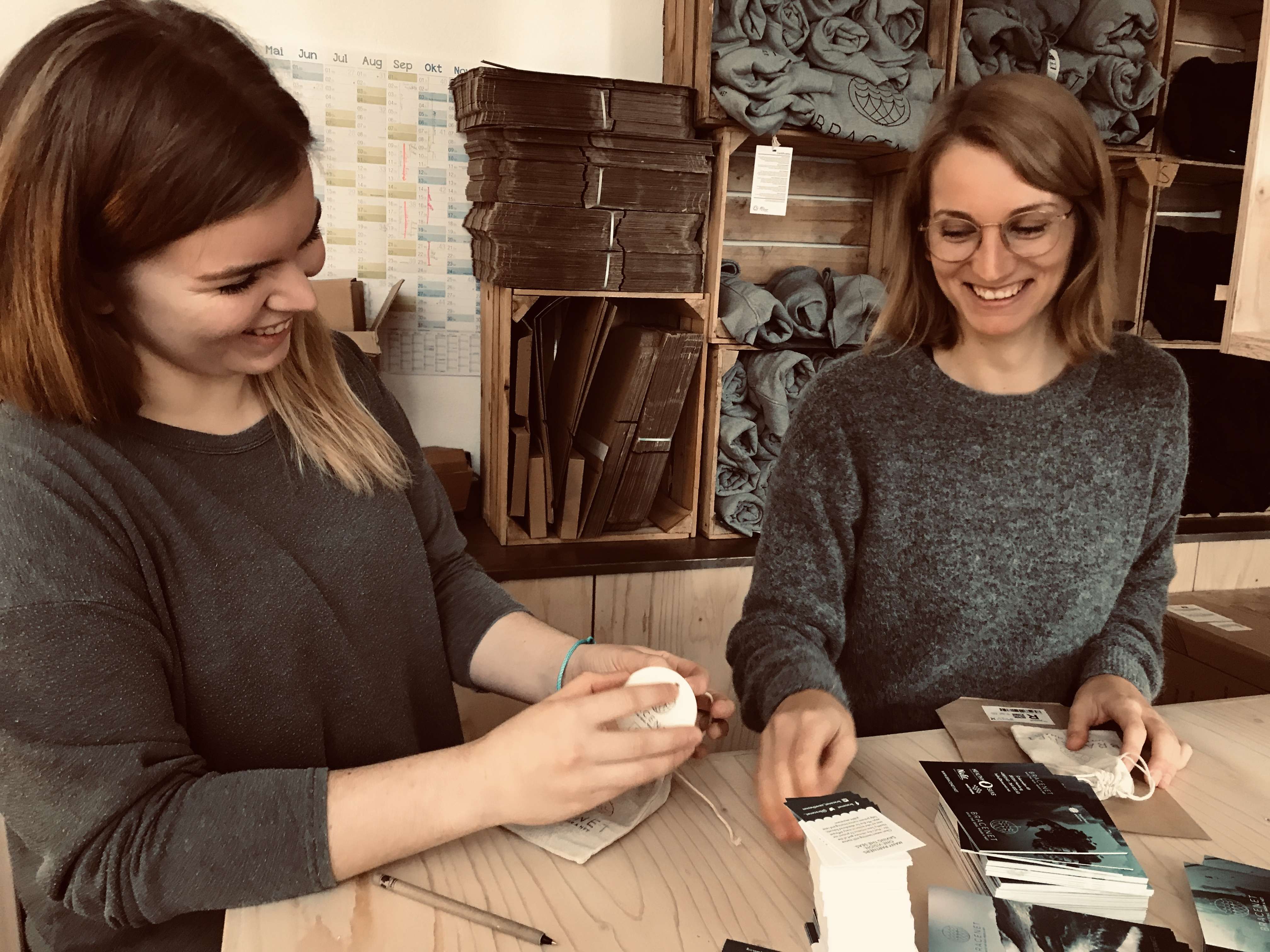 Team Bracenet – that’s who we are.

Steadily growing since 2016, we are now 34 people. Consisting of 29 women and 5 men. Our founding team has also a good women’s quota with 50% – unfortunately, that’s not the typical case.

In 2018, ⅔ of all founders were male. In 2019, this trend declined slightly and instead of 2, there were 1.7 male founders to each female founder. Nevertheless, this means that women are still underrepresented when it comes to founding businesses, although their contributions are just as significant and important as those of their male colleagues – and that is not sustainable. As women often choose to set up businesses with a social or environmental focus, their ideas and participation are particularly important in the current debate on sustainability.

But let’s start from the beginning: What exactly is sustainability?

Sustainability has many faces. The 17 Sustainable Development Goals show that it is about more than reducing Co2 emissions and plastic waste. While we otherwise draw particular attention to the protection of life under water (goal 14), we use this blog post to address the development goals which have a social focus (among them No Poverty, Gender Equality or also Reduced Inequalities).

The general definition of sustainability is based on a three-pillar model, which illustrates its ecological, economic and social dimensions.

While the ecological pillar shows e.g. that high meat consumption and the associated intensive livestock farming are problematic for sustainable development because they drive climate change, the economic pillar deals with the relationship between the economy and the environment. Among other things, this involves dealing responsibly with (existing) resources and extending the life cycles of products in this way. The third pillar is the least publicly communicated, which is why it often fades into the background. However, the social perspective is as essential for sustainable development as the ecological and economic perspectives. The general aim is to give all people equal opportunities as far as possible, but in any case to enable them to live in dignity. Since our current economic system is largely supported by people who work under very questionable working conditions and for low wages, it is clear that social sustainability is often hardly taken into account.

It is time to fight for more social responsibility.

Social sustainability comprises many different aspects. A key factor that has so far been much underestimated is gender equality. Equality is essential to fulfilling fundamental rights, but also to achieve sustainable economic growth based on social and environmental development. Since women make up about half of the total world population, they also hold half of this potential. Many studies show that women often view problems from a different perspective than men and make important contributions to the well-being of society. Especially in the field of social entrepreneurship, but also in sustainable entrepreneurship, as mentioned at the beginning, female representatives can be found significantly more often than in profit-motivated start-ups.

The theory is fine, but in practice, unfortunately, there is nothing to gloss over. From gender pay gaps, domestic violence, unequal division of household and family up to male-dominated leadership positions – unfortunately, all these are still real. It is true that more women are represented in management positions and fewer girls are forced into early marriage now than a few years or decades ago. But despite the many improvements, the goal of equal rights is still far from being met. As mentioned at the beginning, women are significantly less represented e.g. in founding or leadership positions. One of the reasons why the German government introduced a quota for women in 2015. As gender-specific behaviour is often deeply rooted in society, it is quite common in many countries that it is difficult for women to find decent jobs and that they are often at a professional disadvantage in general. Furthermore, especially in developing countries and emerging economies, girls and women often suffer from the fact that their access to education or medical care is made difficult or forbidden. They are more frequently victims of violence and discrimination worldwide and are underrepresented in political and economic decision-making processes.

What Covid-19 teaches us about Gender Equality

The recent Covid-19 pandemic demonstrates the shortcomings of the current system in this respect. In many countries or cities, the lockdown led to an increase of up to 30 % in the case rate of domestic violence – for example also in Berlin. Furthermore, it is now clearer than ever before how fundamental both social and economic participation of women is, as they make up a large part of care professionals, public education and other social work. Moreover, in addition to this paid care work, women spend three times as much time on unpaid care, household and educational work as men – although this is completely ignored in the economic system. This is very contradictory as this unpaid work, which is carried out mainly by women, to a large extent supports and enables the current system, which places so much emphasis on productive, paid work.

Our goal is sustainability. In our view, this not only includes an equal society but rather necessitates it. A world that exploits the disadvantaged and the weak cannot, by definition, be sustainable.

In order to achieve a long-term viable and thus sustainable economic system, rich countries cannot continue to live at the expense of poorer countries where mainly women do work for very little money. In addition to this economic exploitation, domestic violence, but also child marriage or FGM (female genital mutilation) unfortunately still exist to an alarming extent. It is important for us to draw attention to these abuses and to tackle these social inequalities. Let us act together in a socially responsible manner.

What you can do

There are many ways to support equal opportunities and promote equal rights. True to the motto “Your shopping list is a ballot paper”, it helps to start with your own consumer behaviour. We have put together a few suggestions for you:

As mentioned at the beginning, women found significantly fewer companies than men. In order to promote equal rights and economic activity among women, we can provide targeted support for companies founded (or co-founded) by women. The positive side effect of this is that these companies often include another aspect.

A well-known example of exploitative working conditions is found in the textile industry: Fast fashion is comfortable and cheap? Unfortunately not for everyone. Workers and the environment suffer from this industry and every purchase decision we make is a vote for or against this way of doing business. We can empower women (and people in general) simply by paying them fair wages for their work – after all, that’s what you want, too. It is therefore ideal to support fair businesses founded by women. Because the world needs more female entrepreneurs and social responsibility in production! At the same time, these women entrepreneurs can encourage others to realise their own potential.

Support the fight against social ills

Of course, it is not only women who are fighting for a fairer world. Women empowerment also means human empowerment. We would therefore also like to take this opportunity to draw attention to the fact that more and more companies are based on business concepts that create added social value. They pursue different missions and yet all have the same goal: To enable (disadvantaged) people to have a better life. Some of our favourites are:

Of course there are many more!

In order to assume social responsibility, however, we do not have to start consuming as if we went mad. Our everyday life provides dozens of situations in which we can work for equal opportunities. Especially in moments that seem questionable to you, it is important not to look away. This does not mean interfering in every little dispute, but putting in a word or offering help when people are disadvantaged, for example, because of their origin, disability or gender. It can also help to pay attention to certain hand signals. Especially in the course of the Corona pandemic, domestic violence increased significantly so that the “Signal For Help” offers those affected the possibility to silently call for help. Empowerment also means breaking the taboo. Many women who are affected by domestic violence suffer in silence and are afraid to confide their worries to anyone. But to solve the problem, people need to talk about it and seek help. So if you are worried about a good friend, express your fears carefully and offer her (or him) an open ear. Better to ask an additional question than one too less!