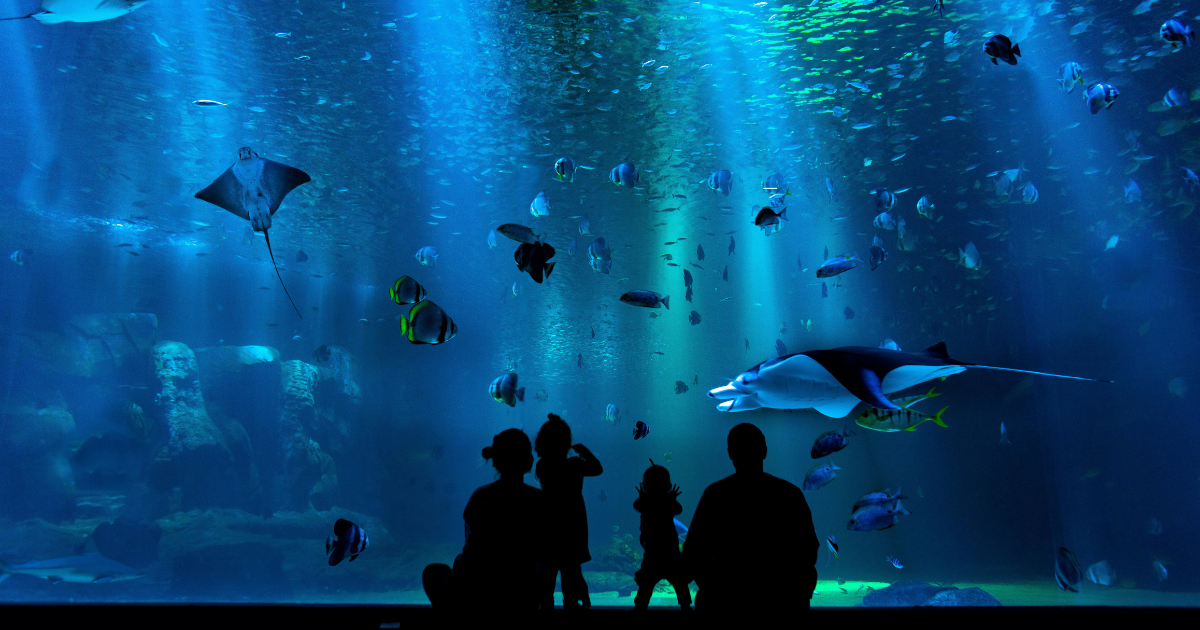 Trips to tropical aquariums and zoos are still highly regarded in today’s society and popular leisure activity. Many people argue that their children should learn something about the way of life and appearance of animals. Zoos are supposed to ensure the protection and preservation of species. They often state that they offer a place to learn a lot about exotic animals, that they are kept in a species-appropriate manner and that they live much longer than in freedom. But how much truth is in these statements?

Typically, you can find small information boards in front of each enclosure in a zoo, informing us about the animal’s country of origin. However, usually, no detailed information is given about where exactly the animal comes from, how it was brought to the zoo and under which conditions it lives in its natural habitat. Instead, the following is a typical image:

For instance, we see sharks swimming from left to right and from right to left in a few square meters with a monotonous gaze. They might have injuries on their mouths from being captured, transported and confined. Depending on how long the sharks have been in captivity, their fins may be bent. Some may even have their jaws dislocated from the capture hook so that they protrude unnaturally forward. On closer inspection, visitors can sometimes also see the rotten fins of sunfish through the glass wall and fungus on their skin. This demonstrates that many animals in captivity have a different appearance and behave differently than in the open sea.

Another example is offered by tigers, which in the wild travel dozens of kilometres, swim and hunt every day. In zoos, they are confined to a few square meters, have no place to retreat to, and lie around bored in their enclosures. With the image that zoos and aquariums try to portray, they are using our ignorance of the real world to create pseudo-knowledge. They typically only share superficial information and share only those facts they want us to know.

The designed habitats of the animals

You can imagine that all areas in zoos are strategically planned – where to place which animals, pathways and areas for people – so that we can enjoy them the most. Therefore, the enclosures and pools are designed according to the aesthetic ideas of the visitors and how they imagine the habitat of the animals. Thus, the environments are often equipped with artificial, but natural-looking objects, plants and temperatures. Additional soundtracks are played to provide visitors with a backdrop that reflects the supposedly real habitat of the animals. According to Professor David Grazien, these include concrete rocks and termite mounds, fibreglass, perfectly shaped aquarium glass windows and hi-fidelity sound systems.

Construction and design primarily follow people’s needs. This may involve showing people what it looks like where the animals come from and what it feels and sounds like. However, it ignores how the animals perceive these influences. Since all the effects described are artificially created, they are disturbing sounds and factors that for them have nothing to do with their lives before captivity. A termite mound without termites, without smell and made of concrete – what benefit does an animal get from it? None at all!

Numerous zoological institutions advertise that they are committed to species conservation. Does this claim hold up to scrutiny? In the last five to ten years, German zoos and aquariums have released around 100 animals into the wild, but at the same time, they have taken 800 endangered animals from their natural habitat and imported them into Germany, so there is a clear imbalance here. Additionally, it is often said that animals live longer in zoos than in the wild. This may be true for some animals, for example prey animals, but the statement does not apply across the board to all animals. For example, look at these numerical examples of marine animals in captivity versus freedom:

As can be seen from the table, these marine animals in captivity live only a fraction of the time they would in freedom.

Even of the popular dolphins, every aquarium needs a new one every two or three years. When dolphins are captured, they not only lose their freedom but also suffer awfully. This is because they are very close to their conspecifics and live in family bonds and fixed groups. Depending on their origin, they communicate with a different dialect. Then, when they are captured on behalf of the aquarium, they are separated from their family and united with other conspecifics that probably communicate completely differently. In captivity, they often fall into a severe depression and after some time they decide to stop breathing and die. An interesting fact about dolphins: unlike us humans, who breathe automatically by reflex, dolphins decide independently when to breathe. But visitors to zoos will hardly find this information on the information signs. Instead, aquariums and zoos advertise environmental protection, animal welfare and species-appropriate captivity on their websites.

One last point clearly shows that zoos do not place enough emphasis on animal welfare and sufficient habitat. Let’s make a quick calculation: Hagenbecks Tierpark in Hamburg is home to the Tropical Aquarium, which covers 8,000 square meters. A total of 14,300 animals live in these 8,000 square meters. If you don’t include the space and rooms for humans, each animal would have about 0.559 square meters of space available. If we now subtract the square meters that are mainly used by people inside the zoo, the value would be significantly reduced again. To us, that doesn’t sound like enough space.

In conclusion, we can only take away from a zoo what we see. Zoos, by their design and structure, create a form of pseudo-knowledge that we mostly absorb and accept without a critical eye. As many facts are simply left out, zoons cannot produce real knowledge.

A lot of money is put into the architecture and structure of a facility and unfortunately, everything is planned for the eye and well-being of humans. The feelings and the well-being of the animals find therefore mostly no attention. How can a zoo commission the wild capture of many animals, when during the transport of, for instance, fish, a large number already dies due to stress and wrong handling? In sum, a zoo cannot claim to contribute to the protection of species if it takes the animals out of their natural habitat. It would make much more sense to try to preserve their original habitats. Species protection must therefore take place on-site.

It is clear that this must change in the future. But how can animal cruelty and false knowledge be prevented? A simple solution would be to consistently stop going to the zoo. We humans and especially children can be just as fascinated by animals in their natural habitat or in documentaries. Another idea: simply go to the forest and look around to see what the animal world has to offer on your own doorstep.

The oceans are in danger: marine pollution, underwater noise, illegal fishing, and the consequences of the climate crisis threaten ecosystems and consequently our livelihoods. We have to do something about it! We believe that we can accomplish the biggest difference when we collaborate with other organizations and companies that share our mission. With this in mind, we are proud to fight alongside Sea Shepherd for the future of our oceans.